Is it warmer now than it was in the past? 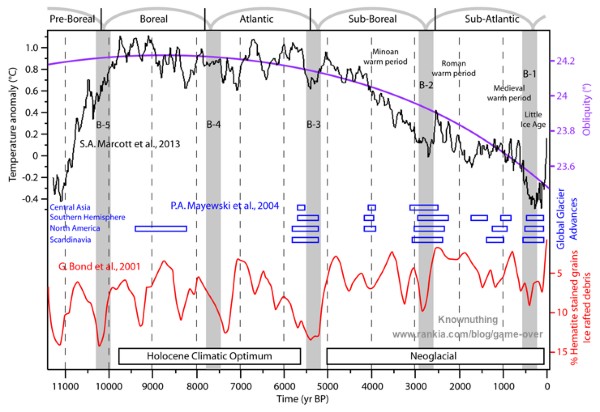 I was given permission by Euan Mearns (Javier) to show his work on the reconstruction of the climate of the entire Holocene.  You can read his report here,

The Dutch version is here:

My own comments are placed in [ ]

Fig.9 is a summary of all known results that deal with the climate reconstruction of the past.

[Observe that the beginning of the Holocene is marked by recovery time after the Younger Dryas cooling period. Many scientists like myself believe that the cause of this cooling period was due a great catastrophe that is also related to the Big Flood of Noah]

Note that the temperature of the planet is set by the obliquity (tilt) of its axis, not so much by solar variability, and Earth’s obliquity is decreasing every day at the fastest rate in forty thousand years (figure 9). Only once in the last million years have temperatures failed to fall with falling obliquity, but when this happened (during MIS 11, 400 kyr ago), 65°N summer insolation was very high, while now it is very low.

The rebound effect of the post-LIA (Little Ice Age) natural warming together with any anthropogenic warming contribution has probably taken us above the temperature that corresponds to the present inclination of the axial tilt, since by a variety of biological and physical methods our present state appears to be similar, at least in the northern hemisphere, to the conditions around the Mid-Holocene transition ~ 5000 years ago. It is possible therefore that over the next 1-2 centuries global temperatures might naturally descend by 0.2-0.4°K to reach our obliquity target, regardless of solar activity.

I would expect significant cooling and climate change from reduced solar activity around 2600 AD when the next low in the ~ 1000-year Eddy cycle is expected.

[Looking at the temperature trend on the graph]

We might face a solar future similar to what the Romans enjoyed between 150 BC and 350 AD. [This is in fact ] A very positive development if true.

See also here: The weather in Jesus’ time | Bread on the water

In terms of climate, the post-LIA natural warming should end soon if it hasn’t ended already, because these recovery periods from the lows in the ~ 2500-year Bray cycle rarely last for more than 400 years. As solar centennial activity cannot increase further, we are probably moving to an end to natural warming.

Glacial inception, the onset of the next glacial period, could take place around 4000 AD when the next low in the ~ 2500-year Bray cycle acting on a much lower obliquity should set the conditions for the growth of the ice sheets.

[Javier is a pseudonym and he wrote this document in 2016. As far as I can deduce from the caption to Fig 9, the graph is up to date including 2015. We also know from the satellite measurements that the global temperature from 2015 to 2021 has not risen further.

This means that the graph is up to date to present day. The reader sees with me that the image of Fig. 9 is something very different from that published by the IPCC. It is not warmer now than it has been in earlier times. God is good].