What an amazing worship song. It gave me shivers down my spine and blessed me out of my socks! However, Victory4All also have a number of other noteworthy activities in the Humansdorp / Jeffreys Bay area. Please give some of your time to watch the work they are doing for the children.

I came accross this lovely song from Petronel Baard.  Once I heard it again, I was hooked…..could not stop listening to it. Is it warmer now than it was in the past?

I was given permission by Euan Mearns (Javier) to show his work on the reconstruction of the climate of the entire Holocene.  You can read his report here,

The Dutch version is here:

My own comments are placed in [ ]

Fig.9 is a summary of all known results that deal with the climate reconstruction of the past.

[Observe that the beginning of the Holocene is marked by recovery time after the Younger Dryas cooling period. Many scientists like myself believe that the cause of this cooling period was due a great catastrophe that is also related to the Big Flood of Noah]

Note that the temperature of the planet is set by the obliquity (tilt) of its axis, not so much by solar variability, and Earth’s obliquity is decreasing every day at the fastest rate in forty thousand years (figure 9). Only once in the last million years have temperatures failed to fall with falling obliquity, but when this happened (during MIS 11, 400 kyr ago), 65°N summer insolation was very high, while now it is very low.

The rebound effect of the post-LIA (Little Ice Age) natural warming together with any anthropogenic warming contribution has probably taken us above the temperature that corresponds to the present inclination of the axial tilt, since by a variety of biological and physical methods our present state appears to be similar, at least in the northern hemisphere, to the conditions around the Mid-Holocene transition ~ 5000 years ago. It is possible therefore that over the next 1-2 centuries global temperatures might naturally descend by 0.2-0.4°K to reach our obliquity target, regardless of solar activity.

I would expect significant cooling and climate change from reduced solar activity around 2600 AD when the next low in the ~ 1000-year Eddy cycle is expected.

[Looking at the temperature trend on the graph]

We might face a solar future similar to what the Romans enjoyed between 150 BC and 350 AD. [This is in fact ] A very positive development if true.

See also here: The weather in Jesus’ time | Bread on the water

In terms of climate, the post-LIA natural warming should end soon if it hasn’t ended already, because these recovery periods from the lows in the ~ 2500-year Bray cycle rarely last for more than 400 years. As solar centennial activity cannot increase further, we are probably moving to an end to natural warming.

Glacial inception, the onset of the next glacial period, could take place around 4000 AD when the next low in the ~ 2500-year Bray cycle acting on a much lower obliquity should set the conditions for the growth of the ice sheets.

[Javier is a pseudonym and he wrote this document in 2016. As far as I can deduce from the caption to Fig 9, the graph is up to date including 2015. We also know from the satellite measurements that the global temperature from 2015 to 2021 has not risen further.

This means that the graph is up to date to present day. The reader sees with me that the image of Fig. 9 is something very different from that published by the IPCC. It is not warmer now than it has been in earlier times. God is good].

Do not be alarmed!

The big climate picture tells us that we are slowly moving – through ups and downs – to the next ice age. The current warming from the Little Ice Age is very beneficial to humanity and nature. Enjoy today’s relatively favorable climate! Sometime in the future, we will move into a colder phase again and eventually into the next ice age.
Hard facts show that global warming is NOT catastrophic, so there is NO climate crisis. Therefore, stop with your scary messages. Fear always leads to wrong decisions and above all, it obscures the minds of our youth. Instead, inspire them with a positive outlook on the future!
The big climate picture also tells us that extreme weather – consisting of heat waves and cold fronts, droughts and floods, hurricanes and snow storms, etc. – is an integral part of the Earth’s climate. Stop selecting weather events that depress young and old! It also leads to erroneous policies.
For many decades, observations have shown that the IPCC’s climate models misrepresent science. The reality is that changes in CO2 emissions have only a modest effect on Earth’s weather and climate. The reality is that sea level rise has been stable for centuries. So no reason to panic.
CO2 is not a polluting gas. It is essential for all life on Earth. Photosynthesis is a blessing. More CO2 is good for nature and makes the earth greener. It is also good for agriculture, as it increases crop yields worldwide (see Figure 1). With more CO2, we can fight hunger in the world better.
Stop slavishly following the 2015 Paris Climate Agreement. The agreement is based on fear and will only make the world poorer. Instead, develop concrete adaptation plans in collaboration with the regions. Global mitigation policies cost an exorbitant amount of money and have never saved a single life. National adaptation plans are very effective, whatever the causes of climate change may be (see figure 2).
Wind and solar energy can only play a small role in the energy transition. Use clean fossil fuels for increasing energy needs, especially in developing countries. Meanwhile, work together worldwide to develop the nuclear power plants of the future, along with new storage and transport technologies. It will result in greater prosperity and well-being for all.

Figure 1 : CO2 is not a polluter. It is essential for all life on Earth. More CO2 is good for nature and it makes the earth greener. It is also good for agriculture; crop yields are increasing worldwide, allowing us to better fight hunger in the world. 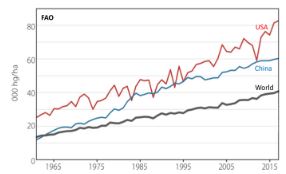 Figure 2 : Climate-related deaths have fallen by more than 95% in the past century thanks to increasing prosperity! Mitigation policies do the opposite, because it destroys wealth. Investing in adaptation always works, whatever the causes of climate change may be. 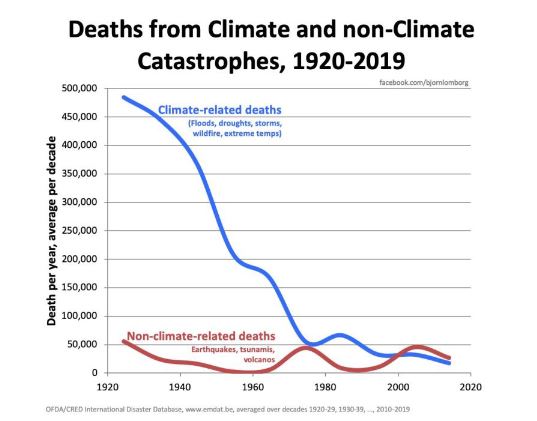 On behalf of the CLINTEL ambassadors and WCD signatories,

Member of the Royal Netherlands Academy of Arts and Sciences (KNAW)

Senior Member of the Dutch Academy of Engineering (AcTI)