The weather in Jesus’ time

Re-blogged from the ‘Archaeology News Network’:

This article was translated by me in Dutch, See here:

The greatest time of the Roman Empire coincided with the warmest period of the last 2,000 years in the Mediterranean, according to a study published in the journal Scientific Reports. The climate conditions derived progressively towards arid conditions and later colder ones coinciding with the historical fall of the empire, as stated in the new study, whose principal researchers are Isabel Cacho, Giulia Margaritelli and Albert Català, from the Faculty of Earth Sciences and the Consolidated Research Group on Marine Geosciences of the University of Barcelona. The study also counts on the participation of the experts from the Research Institute for Geo-hydrological Protection of the National Research Council (CNR-IRPI), the National Institute of Marine Sciences (CNR-ISMAR), the University of Campania Luigi Vanvitelli and the University of Perugia in Italy.

Previous studies had related the fall of the Roman Empire to some natural factors (climate change, volcanic eruptions, etc.). With a large-scale regional view, the study provides high resolution and precision data on how the temperatures evolved over the last 2,000 years in the Mediterranean area. “For the first time, we can state the roman period was the warmest period of time of the last 2,000 years, and these conditions lasted for 500 years”, notes Isabel Cacho, professor at the Department of Earth and Ocean Dynamics of the UB.

The Mediterranean Sea is a semi-closed sea –extremely vulnerable to modern and past climate changes – with a strategic location. Home to many civilizations over the years –with a tradition for historical and archaeological studies – Mare Nostrum is a model to study the periods of climate variation and climate potential influence in civilizations.

In particular, the Roman Empire period is hard to study, “since it coincided with important cultural changes that took place around the Mediterranean. The study of the climate of the past is now the only tool to analyze the dynamics of the climate System of the Earth in different conditions from the current ones, and it is essential to test the validity of the mid and long term prediction models”, note the experts Giulia Margaritelli (also member of the CNR-IRPI) and Fabrizio Lirer (CNR-ISMAR).

The study identifies for the first time a warming phase which is different during the Roman period in the Mediterranean area and is focused on the reconstruction of the sea surface temperature (SST) over the last 5,000 years.  These new records were correlated to data from other areas of the Mediterranean (Alboran Sea, Menorca basin and Aegean Sea) to show a regional signal of the basin to identify the Roman period (1-500 AD) as the warmest period of the last 2,000 years, 2ºC warmer than the average values at the end of the century. The experts also comment on the impact of the rainfall regime during this period –marked by a great regional variation of the most wet and arid phases- in the evolution of the Roman Empire. 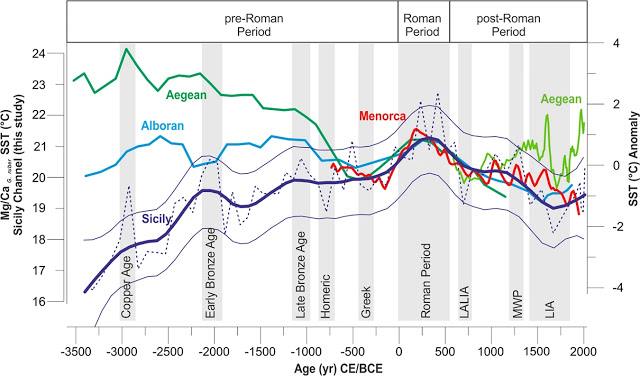 Comparison of the Sea Surface Temperature (SST) records from Sicily Channel (thick dark blue line), Alboran Sea (thick light blue line), Minorca Basin (thick red line) and Aegean Sea (thick dark and light green lines) expressed as SST anomalies in relation with the reference period from 750 BCE to 1250 CE (the only period shared by all the records) in order to better compare the amplitude of the changes across the Mediterranean. Credit: Margaritelli et al. 2020]

According to the authors, this phase coincides with the development of the expansion of the Roman Empire, which suggests a potential relation between favoring climate conditions and the change into the great empire founded by Octavius Augustus in 27 BC. According to the hypotheses of the authors, a climate transition from wet to arid conditions could have marked its following decline.
Framed within the study, experts analyzed the Mg / Ca relation of samples of the planktonic foraminifer Globigerinoides ruber, present in marine sediments, an indicator of sea water temperatures. These unicellular organisms, part of the marine zooplankton, have a specific habitat limited to the surface layers of the water column. “Therefore, the chemical analysis of its carbonated skeleton allows us to reconstruct the evolution of the temperature of the surface water mass over time”, notes Isabel Cacho. With the published results, the study provides new references for new studies on the resilience of Roman populations regarding climate variations using the analysis of social and cultural transformations that took place over the centuries.
“Our study highlights the relevance of the Roman Empire to better understand the behavior of the Mediterranean climate –specifically, the hydrological cycle– in warm conditions compared to the ones in the current climate change scene. This part of the research is essential to improve our ability to adapt to imminent changes”, concludes Professor Isabel Cacho.